Willie Rodriguez Jazz Quartet(Riverside 469)-"Flatjacks"-LP. Some tracks include-Flatjacks,It Happened In Monterey,Seafood Wally plus more!An unsung hero of salsa music in New York, Willie Rodriguez led his own hard-hitting orchestra from the late 1950s to the early 1970s. Specialising in the uncompromising hard salsa popular at the time with local Puerto Rican audiences, his music featured punchy arrangements and strong playing - a combination that has stood the test of time......A veteran tenor saxophonist and flutist, Seldon Powell adjusted and honed his style over the years, being flexible enough to play anything from swing to hard bop and in between. He wasn't the greatest soloist, most ambitious composer, or most spectacular arranger; he was simply a good, consistent player who survived many changes and trends to remain active from the late '40s until the '90s. Powell was classically trained in New York, then worked briefly with Tab Smith in 1949 before joining Lucky Millinder and recording with him in 1950. Powell was in the military in 1950 and 1951, then became a studio musician in New York. He worked and recorded with Louis Bellson, Neal Hefti, Friedrich Gulda, Johnny Richards, and Billy Ver Planck in the mid- and late '50s. Powell also played with Sy Oliver and Erskine Hawkins, and studied at Juilliard. He traveled to Europe with Benny Goodman's band in 1958, and worked briefly with Woody Herman. Powell was a staff player for ABC television in the '60s, and also played and recorded with Buddy Rich, Bellson, Clark Terry, and Ahmed Abdul-Malik. He did a number of soul-jazz and pop dates in the late '60s and early '70s, among them a session with Groove Holmes and big-band dates backing Gato Barbieri and Dizzy Gillespie. Powell was principal soloist in Gerry Mulligan's 16-piece band at the JVC Jazz Festival in New York in 1987. He recorded as a leader for Roost and Epic. The LP has been autographed on the front cover by Willie Rodriguez with a fountain pen in black and Seldon Powell with a fountain pen in brown...............CONDITION OF VINYL,COVER AND AUTOGRAPHS IS VG. 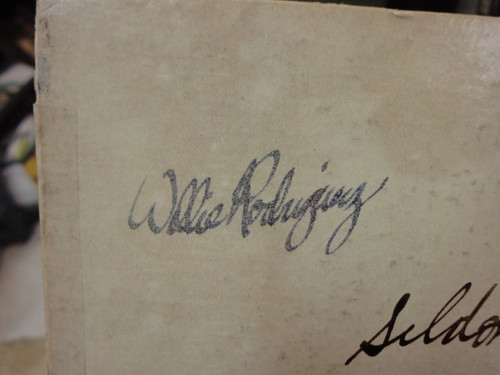