THIS IS AN AUTHENTICALLY AUTOGRAPHED PHOTO BY WAYNE ROGERS.. THIS IS A 7 INCH BY 9 INCH BLACK AND WHITE PHOTO SIGNED BY WAYNE ROGERS. HAS AN ATTACKED ORIGINAL DATED BYLINE ON NBC TV STATIONARY. CONDITION OF THE PHOTO AND AUTOGRAPH IS EXCELLENT. Wayne M. Rogers (born April 7, 1933, Birmingham, Alabama) is an American film and television actor, best known for playing the role of 'Trapper John' McIntyre in the long-running U.S. television series, M*A*S*H. He succeeded Elliott Gould, who had played the character in the movie, and was succeeded later by Pernell Roberts on the M*A*S*H spin-off Trapper John, M.D.. Rogers is a graduate of Webb School in Bell Buckle, Tennessee. He also graduated from Princeton University with a history degree in 1954, where he was a member of the Princeton Triangle Club, and served in the U.S. Navy before becoming an actor. He has been married twice; first from 1960 to 1979 (fathering two children), then to Amy Hirsh, from 1988 to the present. 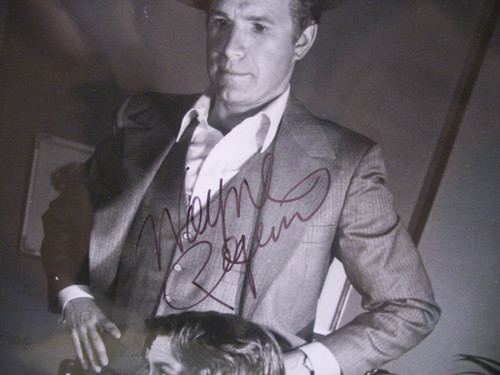