Original Cast Recording-"The Boys From Syracuse"(Capitol TAO 1933)-LP.The Boys from Syracuse is a musical with music by Richard Rodgers and lyrics by Lorenz Hart, based on William Shakespeare's play, The Comedy of Errors, as adapted by librettist George Abbott. The score includes swing and other contemporary rhythms of the 1930s. The show was the first musical based on a Shakespeare play. Further back, The Comedy of Errors was loosely based on a Roman play, The Menaechmi, or the Twin Brothers, by Plautus.The show was revived Off-Broadway, opening at Theatre Four on April 15, 1963 and running for 500 performances. Directed by Christopher Hewett, the cast featured Stuart Damon (Antipholus of Syracuse), Clifford David (Antipholus of Ephesus), Danny Carroll (Dromio of Syracuse), Rudy Tronto (Dromio of Ephesus), Ellen Hanley (Adriana), Julienne Marie (Luciana), and Cathryn Damon. The LP has been autographed on the front cover by Richard Rodgers with a fountain pen in red...............CONDITION OF VINYL IS WEAK VG.CONDITION OF COVER AND AUTOGRAPH IS VG................. 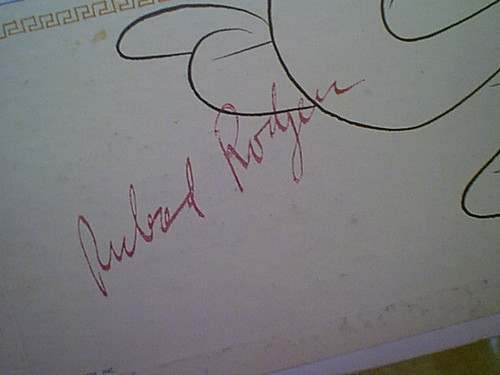