Showcard For The Theatre Four-1965-6" X 9"-6 pages-"The BOys From Syracuse"-theatre program.The Boys from Syracuse is a musical with music by Richard Rodgers and lyrics by Lorenz Hart, based on William Shakespeare's play, The Comedy of Errors, as adapted by librettist George Abbott. The score includes swing and other contemporary rhythms of the 1930s. The show was the first musical based on a Shakespeare play. Further back, The Comedy of Errors was loosely based on a Roman play, The Menaechmi, or the Twin Brothers, by Plautus. The Showcard has been autographed on the front cover by Richard Rodgers with a fountain pen in brown.....................BOTH SHOWCARD AND AUTOGRAPH ARE IN VERY GOOD CONDITION................... 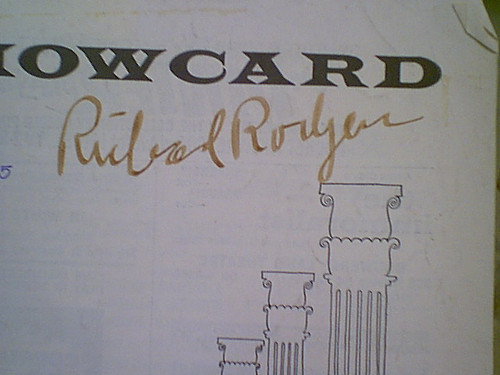