This item is a 7" X 8",color lithograph photo of Ray Romano.Ray Romano grew up in the Forest Hills section of the borough of Queens in New York City and turned to comedy in his mid-twenties after appearing at an open-mic night in a New York comedy club in 1984. The same year, he gave up outside work and won a standup comedy competition sponsored by a local radio station. He went on to appear in comedy clubs around the country, eventually getting television exposure on The Tonight Show with Johnny Carson and its successor with Jay Leno, then on Late Night with David Letterman. Letterman offered him a development deal with his production company, Worldwide Pants, which led to the 1996 launch of the situation comedy Everybody Loves Raymond on CBS. The show got good ratings and attracted favorable critical comment. Romano earned Emmy Award nominations for Outstanding Lead Actor in a Comedy Series in 1999, 2000, and 2001. He won awards from the Television Critics Association (Outstanding Individual Achievement in Comedy, 1999), the American Comedy Awards (Funniest Male Lead in a TV Series, 2000), and TV Guide (Actor of the Year in a Comedy Series, 2001). He is also the author of the best-selling book Everything and a Kite. His June 1999 appearance at Carnegie Hall as part of the Toyota Comedy Festival at New York was recorded and released by Columbia Records as his debut album, Live at Carnegie Hall, in October 2001.The lithograph photo has been autographed on the fornt by Ray Romano............BOTH PHOTO AND AUTOGRAPH ARE IN VERY GOOD CONDITION. 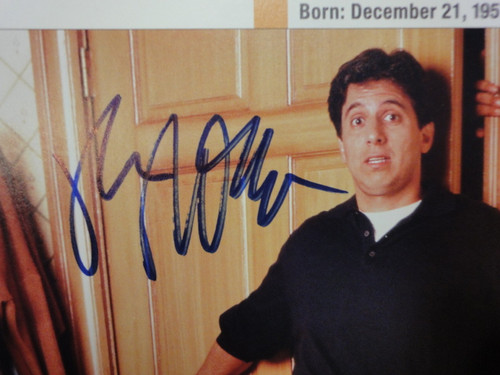