Kenny Rogers-"Live In Concert"-1982-11" X 15"-22 pages-color.It took several tries before Kenny Rogers became a star. As a member of the First Edition (and the New Christy Minstrels before that), he shared in some million-sellers, among them "Reuben James" and "Ruby, Don't Take Your Love to Town," an excellent Mel Tillis song about a disabled veteran. But superstardom lay ahead for this Texan, and it arrived in the late '70s. His experience with the two previous pop groups had prepared him well: he knew the easy listening audience was out there, and he supplied them with well done middle-of-the-road songs with a country flavor. Having gone solo, in 1976 Rogers charted with "Love Lifted Me." But it was with an outstanding song by writers Roger Bowling and Hal Bynum, "Lucille," that his star shot upward. The concert program has been autographed on the front cover by Kenny Rogers..........BOTH CONCERT PROGRAM AND AUTOGRAPH ARE IN VERY GOOD CONDITION. 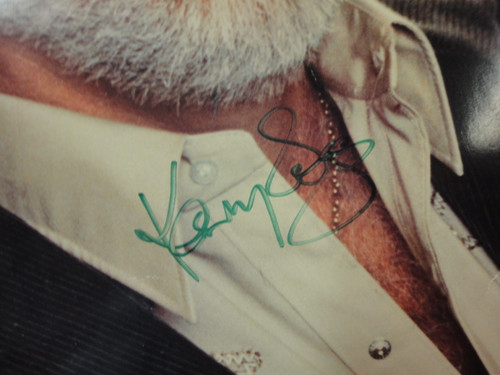