Playbill For The Forty-Eighth Street Theatre-1950-"Black Chiffon"-6" X 9"-32 pages-theatre program. This vintage Playbill features Flora Robson in the 1950 Production of "Black Chiffon".Dame Flora McKenzie Robson DBE (28 March 1902  7 July 1984) was an English actress, renowned as a character actress, who played roles ranging from queens to villainesses.Robson made her stage debut in 1921, at aged 19. Standing 5 feet 10 inches (1.78 m), but lacking the glamorous looks of a leading lady (with her high forehead, wide mouth and imposing nose), she specialized in character roles, notably that of Queen Elizabeth I in both Fire Over England (1937) and The Sea Hawk (1940). At the age of 32, Robson played the Empress Elizabeth in Alexander Korda's Catherine the Great (1934). She was nominated for the Academy Award for Best Supporting Actress for her role as Ingrid Bergman's servant in Saratoga Trunk (1945). After the war, demonstrating her range, she appeared in Holiday Camp (1947), the first of a series of films which featured the very ordinary Huggett family; as Sister Philippa in Black Narcissus (1947); as a magistrate in Goodtime Girl (1948); as a prospective Labour MP in Frieda (1947); and in costume melodrama, Saraband for Dead Lovers (1948). Her other film roles included the Queen of Hearts in Alice in Wonderland (1972), Livia in the abortively-attempted I, Claudius (1937), Miss Milchrest in Murder at the Gallop (1963) and Ftatateeta in Caesar and Cleopatra (1945).She acted late into life, latterly for American television films, including a lavish production of A Tale of Two Cities (in which she played Miss Pross). She also gave performances for British television, including The Shrimp and the Anemone. She also continued to act in the West End, in such plays as Ring Round the Moon, The Importance of Being Earnest and Three Sisters.The Playbill has been autographed on the front by Flora Robson with a fountain pen in red...............BOTH PLAYBILL AND AUTOGRAPH ARE IN VERY GOOD CONDITION.............. 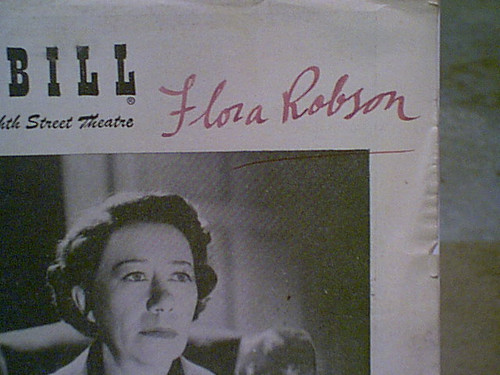