This is an authentically autographed TV Guide by Dan Rowan and Dick Martin.. TV Guide-March 28 1970-Cover is signed by Dan Rowan and Dick Martin, condition of the magazine and autographs is VERY GOOD. Rowan & Martin's Laugh-In is an American sketch comedy television program which ran for 140 episodes from January 22, 1968, to May 14, 1973. It was hosted by comedians Dan Rowan and Dick Martin and was broadcast over NBC. It originally aired as a one-time special on September 9, 1967 and was such a success that it was brought back as a series, replacing The Man from U.N.C.L.E. on Mondays at 8 pm (EST). The title, Laugh-In, came out of events of the 1960s hippie culture, such as "love-ins" or "be-ins." These were terms that were, in turn, derived from "sit-ins," common in protests associated with civil rights and anti-war demonstrations of the time. The show was characterized by a rapid-fire series of gags and sketches, many of which conveyed sexual innuendo or were politically charged. The co-hosts continued the exasperated straight man (Rowan) and "dumb" guy (Martin) act which they had established as nightclub comics. This was a continuation of the "dumb Dora" acts of vaudeville, best popularized by Burns and Allen. Rowan and Martin had a similar tag line, "Say goodnight, Dick". Laugh-In had its roots in the humor of vaudeville and burlesque, but its most direct influences were from the comedy of Olsen and Johnson (specifically, their free-form Broadway revue Hellzapoppin'), the innovative television works of Ernie Kovacs, and the topical satire of That Was The Week That Was. 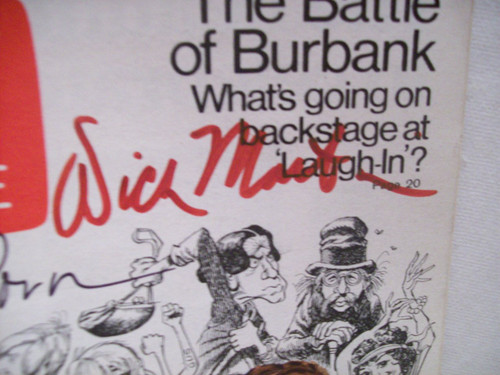