David Lee Roth-1986-"The World Tour"-24 pages-11" X 14"-color concert program.This vintage concert program is loaded with color photos of David Lee Roth.David Lee Roth (born October 10, 1954) is an American rock vocalist, songwriter, actor, author, and former radio personality. Roth was ranked nineteenth by Hit Parader on their list of the 100 Greatest Heavy Metal Singers of All Time.Roth is best known as the original, and current lead singer of California-based hard rock outfit Van Halen. After departing Van Halen in 1985 Roth enjoyed a successful career as a solo artist, which originated while still a member of that band and yielded several RIAA-certified Gold and Platinum records. After more than two decades apart, Roth rejoined Van Halen in 2007 for a North American tour that became the most successful in the band's history and one of the highest grossing of that year. Roth has remained the lead singer of Van Halen since his 2007 return and is currently rumored to be recording material with the band for their first album since 1998.The concert program has been autographed on the front cover by David Lee Roth..........BOTH CONCERT PROGRAM AND AUTOGRAPH ARE IN VERY GOOD CONDITION. 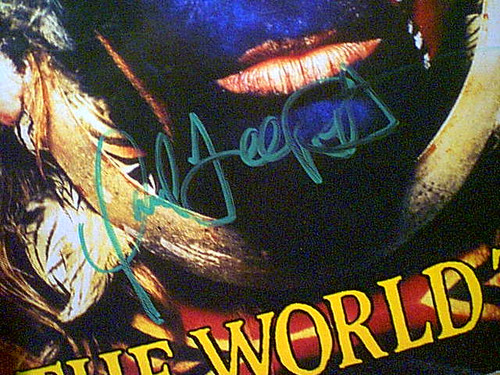