THIS IS AN AUTHENTICALLY AUTOGRAPHED PHOTO BY CLIFF ROBERTSON... THIS IS A 8 INCH BY 10 INCH BLACK AND WHITE PHOTO SIGNED BY CLIFF ROBERTSON WITH DATED PARAMOUNT BYINE. CONDITION OF THE PHOTO AND AUTOGRAPH IS VERY GOOD. Three Days of the Condor is a 1975 American thriller film produced by Stanley Schneider and directed by Sydney Pollack. The screenplay, by Lorenzo Semple Jr. and David Rayfiel, was adapted from the novel Six Days of the Condor by James Grady.[1] The movie is a suspense drama set in contemporary New York City, and is considered an exposition of the moral ambiguity of the actions of the United States government following the Vietnam War and Watergate. It stars Robert Redford as an employee of the Central Intelligence Agency who inadvertently becomes involved in a deadly power struggle within the agency. The film was nominated for the 1976 Academy Award for Film Editing. Semple and Rayfiel received an Edgar Award from the Mystery Writers of America for Best Motion Picture Screenplay. 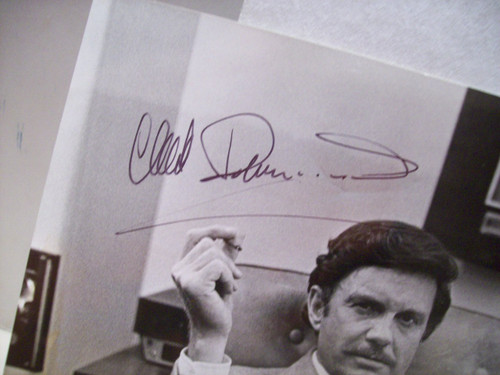