Bill Robinson & Cab Calloway-"She's Tall She's Tan She's Terrific"-1937-Mills Music-Sheet Music. This song is featured in the 1937 3Rd Edition Cotton Club Parade starring Bill Robinson and Cab Calloway.The grandson of a slave, as a child Bill Robinson first performed on street corners for nickels and dimes. Developing into one of the world's foremost tap-dancers, he became a vaudeville star and later played such big theaters as the Roxy and the Palace; he also appeared in a number of major stage musicals. In the early '30s he broke into movies, usually playing the stereotypical happy-go-lucky blacks that populated Hollywood films. He became famous and popular for the four films in which he co-starred with Shirley Temple (1935-38). Well-liked by the black community, he was called "the Honorary Mayor of Harlem." He also coined the word "copacetic" and it soon came into general use. He was the subject of the hit Sammy Davis Jr. song "Mr. Bojangles." In 1989, Congress declared his birthday to be National Tap-Dancing Day. The sheet music has been autographed on the front cover by Bill Robinson with a fountain pen in blue and Cab Calloway with a fountain pen in black....BOTH SHEET MUSIC AND AUTOGRAPHS ARE IN VERY GOOD CONDITION................... 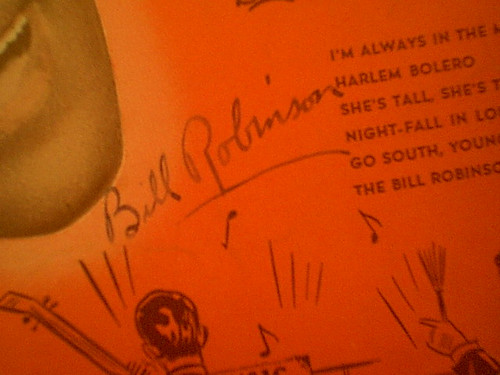