The Chipmunks & David Seville(Liberty LRP 3170-mono)-"Around The World With"-LP. This LP was released in 1960 and features the original cover artwork with the "realistic" looking Chipmunks. Tracks include: The Pidgin English Hula,Japanese Banana,Lily Of Laguna,Stuck In Arabia,Comin Thru The Rye plus more.Ross Bagdasarian (January 27, 1919 û January 16, 1972) was an American pianist, songwriter, actor, and record producer of Armenian ethnic descent, born in Fresno, California. During his professional life he was better known by the stage name David Seville, which he used on his recordings featuring The Chipmunks.The LP has been autographed on the front cover by Ross Bagdasarian in red fountain pen......CONDITION OF VINYL IS TERRIBLE.CONDITION OF COVER AND AUTOGRAPH IS WEAK VG....... 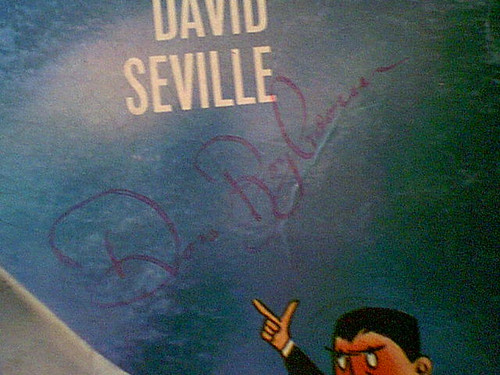