THIS IS AN AUTHENTICALLY AUTOGRAPHED LP BY RALPH RICHARDSON... SHAKESPEARE-SOUL OF AN AGE-STARRING SIR MICHAEL REDGRAVE-NARRATED BY SIR RALPH RICHARDSON(CAEDMON TC 1170)LP HAS GATEFOLD COVER WITH BOOKLET. COVER IS SIGNED BY RALPH RICHARDSON. CONDITION OF THE VINYL,COVER, AND AUTOGRAPH IS VERY GOOD. Sir Ralph David Richardson (19 December 1902  10 October 1983) was an English actor, one of a group of theatrical knights of the mid-20th century who, though more closely associated with the stage, also appeared in several classic films. Richardson first became known for his work on stage in the 1930s. In the 1940s, together with Laurence Olivier, he ran the Old Vic company. He continued on stage and in films into the early 1980s and was especially praised for his comedic roles. In his later years he was celebrated for his theatre work with his old friend John Gielgud. Among his most famous roles were Peer Gynt, Falstaff, John Gabriel Borkman and Hirst in Pinter's No Man's Land. 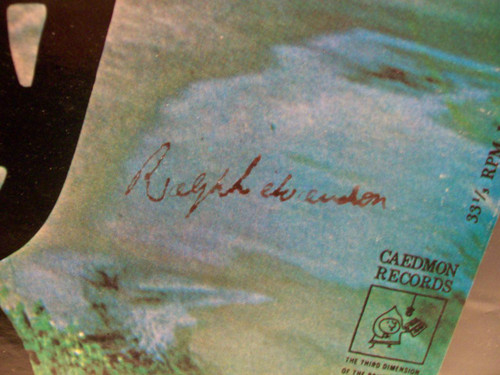