THIS IS AN AUTHENTICALLY AUTOGRAPHED LP BY RALPH RICHARDSON... THE POETRY OF KEATS READ BY SIR RALPH RICHARDSON DIRECTED BY HOWARD O SACKLER(CAEDMON TC 1087)COVER IS SIGNED BY SIR RALPH RICHARDSON-CONDITION OF THE VINYL,COVER, AND AUTOGRAPH IS VG. Sir Ralph David Richardson (19 December 1902  10 October 1983) was an English actor, one of a group of theatrical knights of the mid-20th century who, though more closely associated with the stage, did their best to make the transition to film. Richardson was born in Cheltenham, Gloucestershire, England. When he was a baby, his mother, Lydia Russell, left his father and took him with her to Gloucester, where he was raised in the Roman Catholic faith of his mother (his father and brothers were Quakers). His father supported them with a small allowance. Lydia Richardson wished Ralph to become a priest. Ralph was an altar boy in Brighton, England and was educated by the Xaverian Brothers, but was never particularly religious. 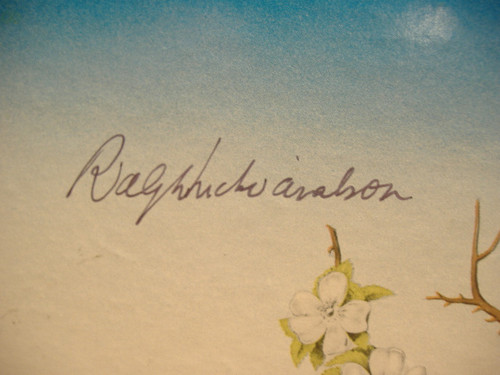