Ripley, Robert "Believe It Or Not!" Book Signed Autograph Illustrated

Robert Ripley-"Believe It Or Not!"-1946-Garden City Pub-6" X 9"-361 pages-Hardcover Book-With Illustrations-Signed By Author. LeRoy Robert Ripley (February 22, 1890 – May 27, 1949) was an American cartoonist, entrepreneur, and amateur anthropologist, who is known for creating the Ripley's Believe It or Not! newspaper panel series, television show, and radio show, which feature odd facts from around the world.Subjects covered in Ripley's cartoons and text ranged from sports feats to little-known facts about unusual and exotic sites. He also included items submitted by readers, who supplied photographs of a wide variety of small-town American trivia ranging from unusually shaped vegetables to oddly marked domestic animals, all documented by photographs and then depicted by his drawings......Ripley, Robert LeRoy, 1890–1949, American cartoonist, b. Santa Rosa, Calif., as Leroy Robert Ripley. The creator of the Believe It or Not! newspaper cartoon, Ripley began his career at 16 as a sports cartoonist for San Francisco newspapers, later moving (1912) to the New York Globe. His first Believe It or Not! strip was published in 1918 and detailed two sports oddities. The cartoons became wildly popular and were soon expanded to a daily series that included oddities of all sorts. Beginning in 1922, Ripley became a world traveler, seeking out strange facts to amaze his public. The strip was ultimately featured in more than 300 papers in 38 countries and 17 languages. Eventually, Ripley also had a New York corporation and national radio show, made 26 movie shorts, and published several best-selling collections of his work.The book has been autographed on the title page by Robert Ripley....................BOTH BOOK AND AUTOGRAPH ARE IN EXCELLENT CONDITION. 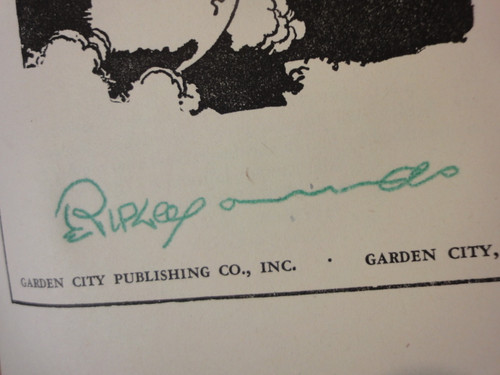 Ripley, Robert "Believe It Or Not!" Book Signed Autograph Illustrated