Life Magazine-April 30,1951-120 pages. This vintage Life Magazine-which originally sold for twenty cents-features a cover photo of General Matt Ridgway-"Matt Ridgway's Arrival To Assume Command". The magazine features a three page article with photos on General Ridgway-"Matt Ridgway Takes Command".Matthew Bunker Ridgway (March 3, 1895July 26, 1993) was a United States Army general. He held several major commands and was most famous for salvaging the United Nations war effort in the Korean War.Ridgway's most important command assignment occurred in 1950, upon the death of Lieutenant General Walton Walker. Upon Walker's death, he received command of the 8th US Army, which had been deployed in South Korea upon the invasion of North Korea in June of that year. At the time Ridgway was serving on the Army staff in the Pentagon as deputy chief of staff for operations and administration. A famed airborne commander from World War II, Ridgway was knowledgeable about conditions in Korea and the Far East and had a strong and dynamic personality. He would need both for the task ahead. His success in turning Eighth Armys morale around, using little more than a magnetic personality and bold leadership, is still a model for the Army, showing how the power of leadership can dramatically change a situation. When Ridgway took command, the army was still in a tactical retreat from a strong foray into North Korea that had been met with an unexpected and overwhelming Communist Chinese advance.The magazine has been autographed on the front cover by Matt Ridgway in black..............BOTH MAGAZINE AND AUTOGRAPH ARE IN VERY GOOD CONDITION............... 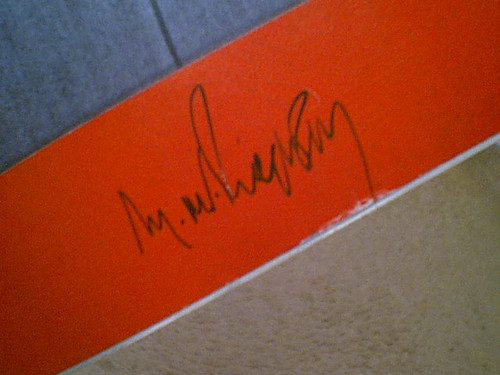