Playbill for The Music Box Theatre-1959-"The Pleasure Of His Company"--starring Cyril Ritchard-6" X 9"-38 pages-theatre program.Popular light comedian Cyril Ritchard was an established London musical comedy star when in 1927 he launched his film career with the On With the Dance short subject series. He made his talking picture debut in Hitchcock's Blackmail (1929) playing the licentious pianist who is murdered by heroine Anny Ondra (but not before singing the film's theme tune!). American baby-boomers will always remember Ritchard as the delightfully despicable Captain Hook in the Mary Martin version of Peter Pan, a role he first essayed on Broadway in 1953, then repeated on television in 1954, 1955, and 1960. His later stage credits include the Anthony Newley-Leslie Bricusse musical The Roar of the Greasepaint, the Smell of the Crowd; the last of his handful of screen appearances was in the 1967 film version of Half a Sixpence. Cyril Ritchard died at age 80, while starring in a musical revue. The Playbill has been autographed on the front cover by Cyril Ritchard with a fountain pen in blue...................BOTH PLAYBILL AND AUTOGRAPH ARE IN VERY GOOD CONDITION.............. 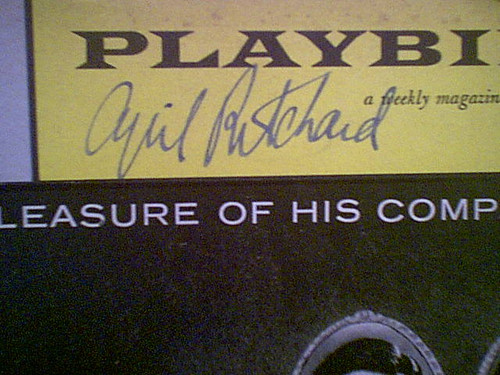