"No Holds Barred The Final Congressional Testimony of Admiral Hyman Rickover"-hearing On Defense Expenditures-January 28, 1982-Washington D.C.-Center For Study Of Responsive Law-1982-4 1/2" X 7"-103 pages-Softcover Book-Signed By Hyman Rickover......................Hyman G. Rickover (January 27, 1900 – July 8, 1986) was an admiral in the U.S. Navy. He directed the original development of naval nuclear propulsion and controlled its operations for three decades as director of the U.S. Naval Reactors office. In addition, he oversaw the development of the Shippingport Atomic Power Station, the world's first commercial pressurized water reactor used for generating electricity. Rickover is also one of four people who have been awarded two Congressional Gold Medals. Rickover is known as the "Father of the Nuclear Navy," and his influence on the Navy and its warships was of such scope that he "may well go down in history as one of the Navy's most important officers." He served in a flag rank for nearly 30 years (1953 to 1982), ending his career as a four-star admiral. His years of service exceeded that of each of the U.S. Navy's five-star fleet admirals—Leahy, King, Nimitz and Halsey—all of whom served on active duty for life after their appointments. Rickover's total of 63 years of active duty service make him the longest-serving naval officer, as well as the longest-serving member of the U.S armed forces in history. Having become a Naval engineering duty officer (EDO) in 1937 after serving as both a surface ship and submarine-qualified unrestricted line officer, his substantial legacy of technical achievements includes the United States Navy's continuing record of zero reactor accidents. The book has been autographed on the title page by Hyman Rickover. Please note that the book was signed near the end of Hyman Rickover's life so thereare tremors in the signature.......................BOTH BOOK AND AUTOGRAPH ARE IN VERY GOOD CONDITION. 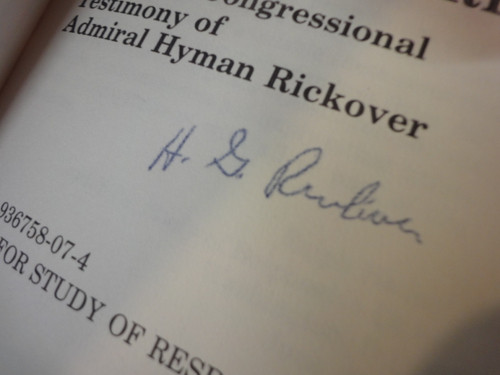