Original Soundtrack-"The Three Musketeers"(Bell 1310-white label DJ)-LP. This soundtrack LP features the 1973 Movie-"The Three Musketeers" starring Richard Chamberlain, Charlton Heston, Michael York and Raquel Welch.Richard Lester's adaptation of The Three Musketeers was only the latest of many when released in 1974, but it arrived with a spirit all its own, one influenced as much by Lester's '60s work as the Alexandre Dumas classic. Even so, it followed the plot of Dumas' novel fairly closely, its liberties in interpretation taken elsewhere. Coming off the success of Cabaret, Michael York plays D'Artagnan, the provincial, would-be swashbuckler who travels to Paris to make his name. There he encounters the eponymous heroes: cynical Athos (Oliver Reed), dashing Aramis (Richard Chamberlain), and arrogant Porthos (Frank Finlay). The trio introduces him to the world of court intrigue as they work to protect the Queen (Geraldine Chaplin) from the schemes of the villainous Richelieu (Charlton Heston) and his followers, Rochefort (Christopher Lee) and Milady (Faye Dunaway). Lester shot the film in conjunction with its sequel, The Four Musketeers. Originally intended as a single film, the split prompted a lawsuit from the cast demanding payment for both films.The LP has been autographed on the front cover by Richard Chamberlain, Charlton Heston, Michael York and Raquel Welch.....CONDITION OF VINYL,COVER AND AUTOGRAPHS IS VG PLUS................. 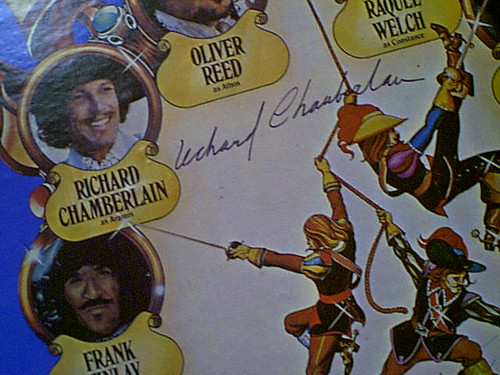