This item is an 8" X 10",black and white photo of actor Steve Reeves in a scene from the movie-"Goliah And The Barbarians".Il terrore dei barbari (AKA: Goliath and the Barbarians) is a 1959 peplum loosely based on events of the Lombard invasion of Italy in AD 568. As with many Italian peplums of the time, the English translation renames some of the characters (for example: "Emiliano" becomes "Goliath" in the English version).Stephen L. Reeves (January 21, 1926  May 1, 2000) was an American bodybuilder and actor. At the peak of his career, he was the highest-paid actor in Europe. A hand signed cut signature by Steve Reeves has been affixed to the front of the photo. The cut signature portion is approximately 1" X 2 1/2".............BOTH PHOTO AND SIGNATURE ARE IN VERY GOOD CONDITION. 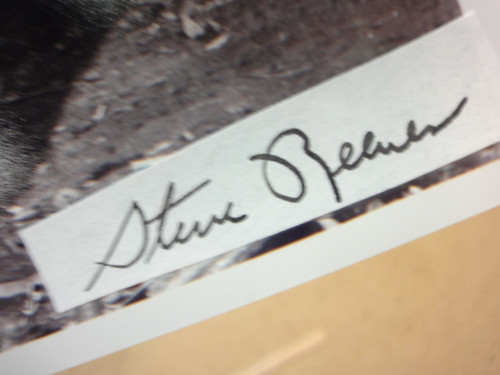