THIS IS AN AUTHENTICALLY AUTOGRAPHED LP BY ROBERT REDFORD AND JANE FONDA.. THE ELECTRIC HORSEMAN FEATURING SONGS PERFORMED BY WILLIE NELSON(COLUMBIA JS 36327)RELEASED IN 1979. DJ COPY. PHOTO COVER IS SIGNED BY ROBERT REDFORD AND JANE FONDA. CONDITION OF THE VINYL,COVER, AND AUTOGRAPHS IS VG PLUS. Sonny Steele (Robert Redford) is a former championship rodeo rider who has sold out to a business conglomerate and is now reduced to making public appearances to sell a brand of breakfast cereal. Prior to making a Las Vegas promotional appearance to ride the champion thoroughbred Rising Star, Sonny discovers the horse has been drugged and is injured. Identifying with the plight of the horse and disillusioned with the present state of his life, Sonny decides to kidnap the animal and travel cross country in order to release it in a remote canyon where herds of wild horses live. Hallie Martin (Jane Fonda), a television reporter eager to be the first to break the Rising Star story, catches up with Sonny and follows him on his unusual quest across the countryside. While en route, the unlikely pair fall in love, all the while having to avoid the pursuing authorities. 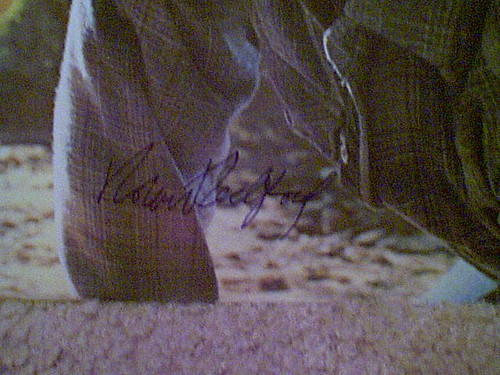