"Movie TV Spotlight"-October 1970-58 pages. This vintage magazine-which originally sold for thirty five cents features color cover photos of Robert Redford and Goldie Hawn plus articles with photos.Charles Robert Redford, Jr. (born August 18, 1936), better known as Robert Redford, is an American actor, film director, producer, businessman, environmentalist, philanthropist, and founder of the Sundance Film Festival. He has received two Oscars: one in 1981 for directing Ordinary People, and one for Lifetime Achievement in 2002. In 2010 he was awarded French Knighthood in the Legion d'Honneur. At the height of Redford's fame in the 1970s and 1980s, he was often described as one of the world's most attractive men and remains one of the most popular movie stars.The magazine has been autographed on the front cover by Robert Redford and Goldie Hawn.........BOTH MAGAZINE AND AUTOGRAPHS ARE IN VERY GOOD CONDITION. 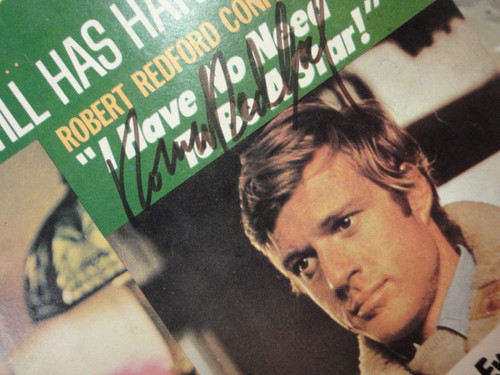