TV Guide Magazine-May 18-24,1963. This vintage TV Guide Magazine-which originally sold for fifteen cents-features a color cover photo of Robert Reed and E.G. Marshall of "The Defenders" plus an article with photos.The Defenders is an American courtroom drama series which ran on CBS from 19611965. It starred E. G. Marshall and Robert Reed as father-and-son defense attorneys who specialized in legally complex cases, with defendants such as neo-Nazis, conscientious objectors, civil rights demonstrators, a schoolteacher fired for being an atheist, an author accused of pornography, and a physician charged in a mercy killing.It was created by television writer Reginald Rose.The TV Guide has been autographed on the front by Robert Reed and E.G.Marshall.............BOTH MAGAZINE AND AUTOGRAPHS ARE IN VERY GOOD CONDITION............ 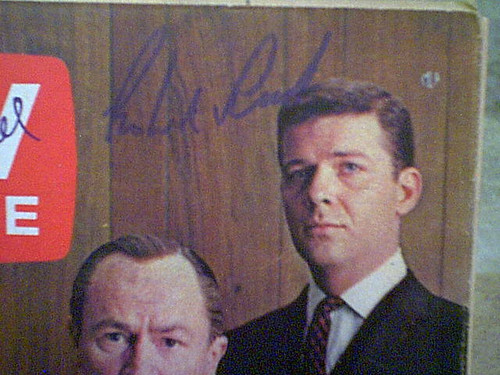