Playbill for The Helen Hayes Theatre-"Tiger At The Gates"-1956-6 1/2" X 9"-32 pages-theatre program. This vintage Playbill features the 1956 production of "Tiger At The Gates" starring Michael Redgrave.The first production of La guerre de Troie n'aura pas lieu was directed by Louis Jouvet, with whom Jean Giraudoux often worked, in 1935 at the Théâtre de l'Athénée. Jouvet also starred as Hector, and the role of Helen was played by Madeleine Ozeray. The translation by Christopher Fry was first presented in New York City by The Playwrights' Company in 1955, with a British cast starring Michael Redgrave as Hector, Leueen MacGrath as Cassandra, and Barbara Jefford as Andromache. In 1956, this production was nominated for the Tony Award for Best Play, Michael Redgrave was nominated for the Tony Award for Best Performance by a Leading Actor in a Play, and Diane Cilento (Helen) was nominated for Tony Award for Best Performance by a Featured Actress in a Play. It also won the New York Drama Critics Circle award for Best Foreign Play.Adapted by William Bast, Tiger at the Gates was an "ITV Play of the Week" in Britain, airing 25 October 1960 (Season 6, Episode 8).A Broadway revival at the Vivian Beaumont Theatre in 1968, starring Philip Bosco as Hector, ran for 44 performances.The Playbill has been autographed on the front cover by Michael Redgrave with a fountain pen in blue................BOTH PLAYBILL AND AUTOGRAPH ARE IN AVERAGE CONDITION.................. 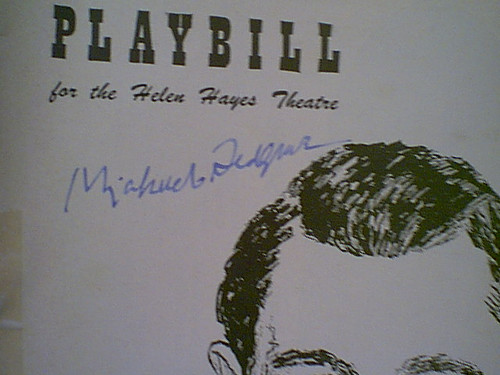