THIS IS AN AUTHENTICALLY AUTOGRAPHED SHEET MUSIC BY DEBBIE REYNOLDS AND DICK POWELL... HOLD MY HAND-THEME FROM SUSAN SLEPT HERE-RELEASED IN 1954-PHOTO COVER IS SIGNED BY DEBBIE REYNOLDS AND DICK POWELL-CONDITION OF THE SHEET MUSIC AND AUTOGRAPH IS VERY GOOD. Susan Slept Here (1954) is a romantic comedy film starring Dick Powell (in his last film role) and Debbie Reynolds. It was based on the play of the same name by Steve Fisher and Alex Gottlieb. The film's plotline was later used again by director Frank Tashlin for 1962's Bachelor Flat 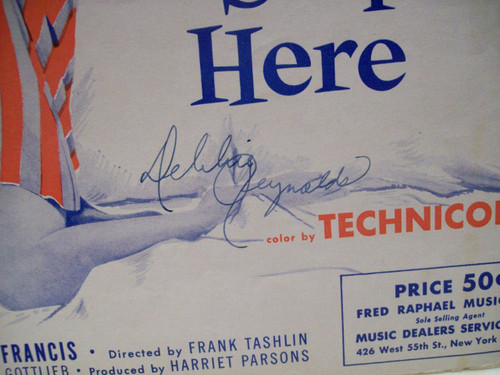