This item is an 8" X 10",color photo of actor Christopher Reeve.Christopher D'Olier Reeve (September 25, 1952  October 10, 2004) was an American actor, film director, producer, screenwriter, author and activist. He achieved stardom for his acting achievements, in particular his motion-picture portrayal of the DC comic book superhero, Superman.On May 27, 1995, Reeve became a quadriplegic after being thrown from a horse during an equestrian competition in Culpeper, Virginia. He required a wheelchair and breathing apparatus for the rest of his life. He lobbied on behalf of people with spinal-cord injuries and for human embryonic stem cell research, founding the Christopher Reeve Foundation and co-founding the Reeve-Irvine Research Center.Reeve married Dana Morosini in April 1992. Christopher and Dana's son, William Elliot Reeve, was born on June 7, 1992. Reeve also had two children, Matthew Exton Reeve (born 1979) and Alexandra Exton Reeve (born 1983), from his relationship with Gae Exton.The color photo has been autographed on the front by Christopher Reeve........BOTH PHOTO AND AUTOGRAPH ARE IN VERY GOOD CONDITION. 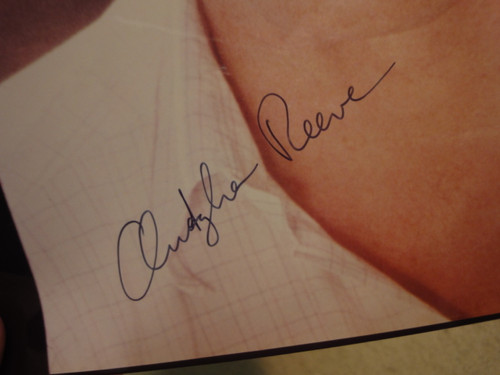