THIS IS AN AUTHENTICALLY AUTOGRAPHED PHOTO BY BURT REYNOLDS AND MIKE DOUGLAS... THIS IS A 8 INCH BY 10 INCH BLACK AND WHITE PHOTO SIGNED BY BURT REYNOLDS AND MIKE DOUGLAS. CONDITION OF THE PHOTO AND AUTOGRAPHS IS VERY GOOD. Burton Leon "Burt" Reynolds Jr.[2] (born February 11, 1936) is an American actor. Some of his memorable roles include Lewis Medlock in Deliverance, Paul Crewe in The Longest Yard, Bo 'Bandit' Darville in Smokey and the Bandit, J.J. McClure in The Cannonball Run and Jack Horner in Boogie Nights. He is one of America's most recognizable film and television personalities with more than 90 feature film and 300 television episode credits. Mike Douglas, born Michael Delaney Dowd, Jr. (August 11, 1925  August 11, 2006), was an American entertainer. 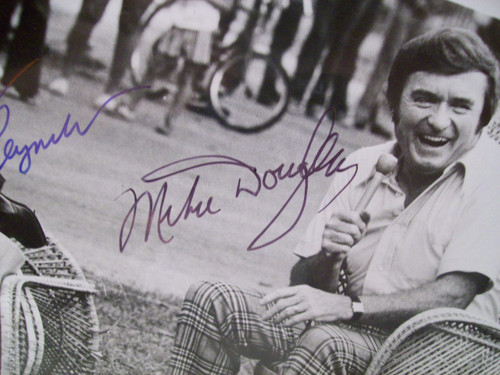