Lou Rawls-1978=9" X 12"-16 pages-concert tour souvenir program.From gospel and early R&B to soul and jazz to blues and straight-up pop, Lou Rawls was a consummate master of African-American vocal music whose versatility helped him adapt to the changing musical times over and over again while always remaining unmistakably himself. Blessed with a four-octave vocal range, Rawls' smooth, classy elegance -- sort of a cross between Sam Cooke and Nat King Cole -- permeated nearly everything he sang, yet the fire of his early gospel days was never too far from the surface. He made his name as a crooner, first by singing jazz standards, then moving on to soul in the mid-'60s, and capped the most commercial phase of his career with a productive stint at Philadelphia International during the latter half of the '70s. Even after his days as a chart presence were over, Rawls remained a highly visible figure on the American cultural landscape, pursuing an acting and voice-over career in addition to his continued concert appearances, and doing extensive charity work on behalf of the United Negro College Fund. The concert program has been autographed on the front cover by Lou Rawls........BOTH CONCERT PROGRAM AND AUTOGRAPH ARE IN AVERAGE CONDITION. 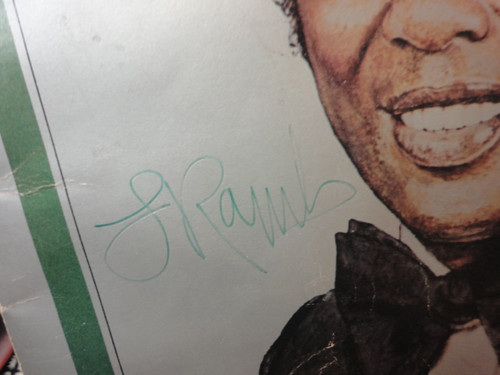