Original Cast-"Carousel"(Decca 8003)-LP. This original cast LP was released in 1949 on the gold and black Decca label. The LP books for $40.00 in Mint condition. The LP features the Broadway Musical-"Carousel" starring John Raitt.Carousel is a musical by Richard Rodgers (music) and Oscar Hammerstein II (book and lyrics) that was adapted from Ferenc Molnar's 1909 play Liliom, transplanting the Budapest setting of Molnar's play to a New England fishing village. The show includes the hit musical numbers If I Loved You, June Is Bustin' Out All Over, and You'll Never Walk Alone. Carousel was innovative for its time, being one of the first musicals to contain a tragic plot. The original production opened on Broadway on April 19, 1945, and ran for 890 performances. The musical has enjoyed award-winning revivals (particularly the 1994 revival at the Vivian Beaumont Theatre) and has been adapted as a Cinemascope 55 film in 1956 and as a made-for-television special on videotape in 1967. It is particularly well-regarded among musicals by the theatre community, and Richard Rodgers, in his autobiography Musical Stages, said it was his favorite musical. Time magazine named it the best musical of the 20th century.The original production, directed by Rouben Mamoulian with choreography by Agnes de Mille, opened at Broadway's Majestic Theatre on April 19, 1945, and closed on May 24, 1947, after 890 performances. The original cast included John Raitt (Billy), Jan Clayton (Julie), Jean Darling (Carrie), Eric Mattson (Mr. Snow), Christine Johnson (Nettie), Murvyn Vye (Jigger), and Bambi Linn (Louise) and Jean Casto (Mrs. Mullin). A two-year national tour and 1949 Broadway revival followed. The LP has been autographed on the front cover by John Raitt with a fountain pen in black........CONDITION OF VINYL,COVER AND AUTOGRAPH IS VG...................... 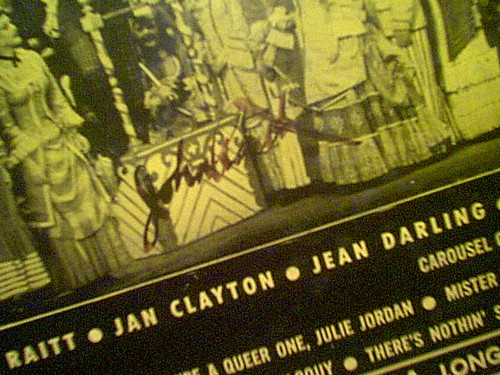