Original Television Soundtrack-"Quick Draw McGraw-The Treasure of Sarah's Mattress"(Colpix 211)-Lp. This vintage cartoon soundtrack LP was released in 1962 and books for $120.00 in Mint condition. The LP features the voices of Daws Butler,Don Messick and Doug Young and the original Hanna Barbera animation artwork on the front cover....Joe Barbera joined MGM studios in 1937 and, with William Hanna, created the characters Tom and Jerry in 1940 and went on to garner seven Academy Awards for animated shorts between 1943 and 1953. They formed Hanna-Barbera Productions in 1957 and created such popular animated TV series as The Flintstones (196066), Hey There, It's Yogi Bear (1963), and The Jetsons (1962)....Bill Hanna was a pioneering animator who, with his partner, Joseph Barbera, masterminded the cartoon characters Yogi Bear, Scooby-Doo, and Tom and Jerry. Their Tom and Jerry cartoons won seven Oscars, and their film Anchors Aweigh (1945) combined animation with live action for the first time. The Hanna-Barbera team won seven Emmy Awards, including the first for an animated series (The Huckleberry Hound Show).The LP has been autographed on the front cover by Bill Hanna and Joe Barbera..........CONDITION OF VINYL,COVER AND AUTOGRAPHS IS VG.RECORD IS IN ORIGINAL COLPIX INNER SLEEVE............ 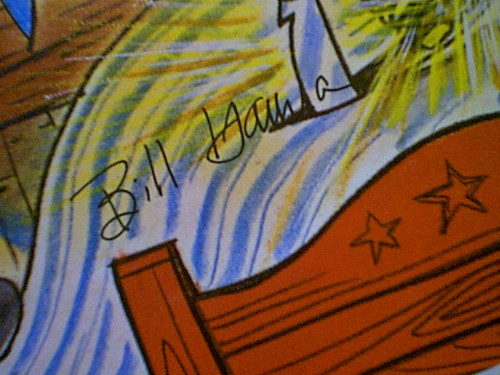