Original Cast Recording-"Zorba"(RCA Red Seal 4732)-LP.Zorba is a musical with a book by Joseph Stein, lyrics by Fred Ebb, and music by John Kander. Adapted from the 1952 novel Zorba the Greek by Nikos Kazantzakis and the subsequent 1964 film of the same name, it focuses on the friendship that evolves between Zorba and Nikos, a young American who has inherited an abandoned mine on Crete, and their romantic relationships with a local widow and a French woman, respectively.The musical premiered on Broadway in 1968 in a production directed by Harold Prince. It was nominated for the Tony Award for Best Musical in a season that included Hair, Promises, Promises and 1776. The last of these won the award. The original production ran for 305 performances, but a 1983 Broadway revival ran for 362 performances with a cast starring Anthony Quinn. 1983 Broadway Revival The 1983 revival directed by Michael Cacoyannis and choreographed by Graciela Danieleopened on October 16, 1983 at the Broadway Theatre, where it ran for 362 performances and 14 previews. The cast included Anthony Quinn and Lila Kedrova (who had both starred in the film version, the latter winning an Oscar for her performance), in addition to Robert Westenberg, Debbie Shapiro, and Rob Marshall.The LP has been autographed on the front cover by Anthony Quinn..............CONDITION OF VINYL,COVER AND AUTOGRAPH IS VG. 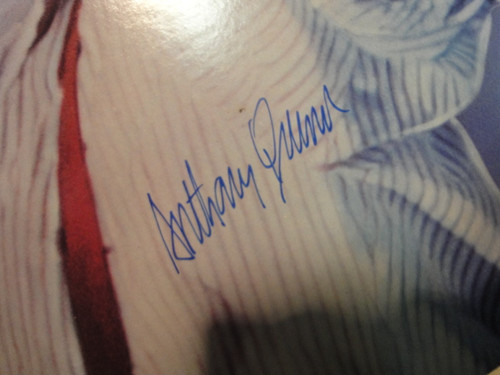