Puente, Tito (Ernesto Antonio Puente, Jr.)-1923–2000, American musician, b. New York City. One of the premier composers and players of Latin music, he was a bandleader, pianist, and virtuoso percussionist. He began playing in the 1930s and performed in various bands while studying at Juilliard (1945–47). In 1947 he formed his own group, the Piccadilly Boys, which shortly afterward became the Tito Puente Orchestra. During the 1950s, Puente became renowned for his Big Band renditions, in person and on recordings, of such Latin dance-craze styles as the mambo and cha-cha; in the 1960s he also turned to pachenga music. Puente played in and led many other bands. Also beginning in the 1960s he collaborated with several jazz musicians and thereafter customarily worked in either a Latin or jazz style, or a combination of the two, becoming an important figure in salsa music. During his long career, Puente won five Grammys and recorded 118 albums. The LP has been autographed on the front cover by Tito Punete with a fountain pewn in blue.....BOTH RECORD AND AUTOGRAPH ARE IN NICE CONITION.RECORD IS IN ORIGINAL TICO SLEEVE. 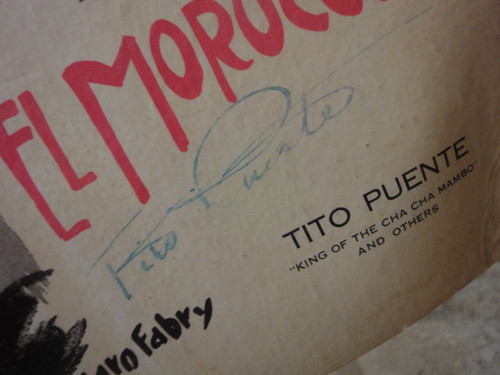