Benjamin Disraeli-"Endymion"-1880-Thomas Y. Cromwell-New York-5" X 7"-332 pages-hardcover book-Signed By Author.Benjamin Disraeli, 1st Earl of Beaconsfield, KG, PC, FRS (born Benjamin D'Israeli; 21 December 180419 April 1881) was a British Conservative statesman and literary figure. He served in government for three decades, twice as Prime Ministerthe first and thus far only person of Jewish parentage to do so (although Disraeli was baptised in the Anglican Church at 13). Disraeli's most lasting achievement was the creation of the modern Conservative Party after the Corn Laws schism of 1846. Although a major figure in the protectionist wing of the Conservative Party after 1844, Disraeli's relations with the other leading figures in the party, particularly Lord Derby, the overall leader, were often strained. Not until the 1860s would Derby and Disraeli be on easy terms, and the latter's succession of the former assured. From 1852 onwards, Disraeli's career would also be marked by his often intense rivalry with William Gladstone, who eventually rose to become leader of the Liberal Party. In this duel, Disraeli was aided by his warm friendship with Queen Victoria, who came to detest Gladstone during the latter's first premiership in the 1870s. In 1876 Disraeli was raised to the peerage as the Earl of Beaconsfield, capping nearly four decades in the House of Commons. Before and during his political career, Disraeli was well-known as a literary and social figure, although his novels are not generally regarded as a part of the Victorian literary canon. He mainly wrote romances, of which Sybil and Vivian Grey are perhaps the best-known today. He was and is unusual among British Prime Ministers for having gained equal social and political renown.The book has been autographed on the title page by Disraeli with a fountain pen in faded black ink........................BOTH BOOK AND AUTOGRAPH ARE IN USED CONDITION................. 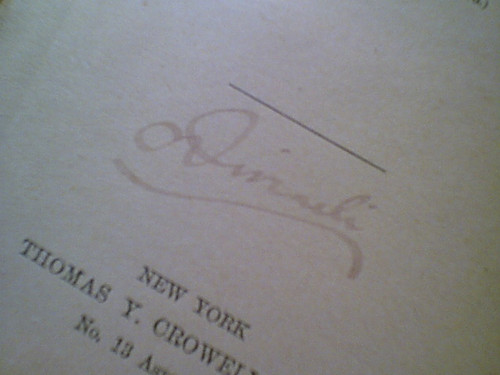