This item is a 6 1/2" X 4 1/2" Postal First Day Cover from Great Britain postmarked June 10, 1971.The first day cover commemorates the visit of H.R.H. Princess Margaret Countess Of Snowden to the Royal Air Force Sealand Station during the 55th Anniversary year of the station.Princess Margaret, Countess of Snowdon CI GCVO GCStJ (Margaret Rose; 21 August 1930  9 February 2002), was the only sibling of Queen Elizabeth II and the younger daughter of King George VI and Queen Elizabeth.Margaret spent much of her childhood years in the company of her older sister and parents. Her life changed dramatically in 1936, when her paternal uncle, King Edward VIII, abdicated to marry the twice divorced American Wallis Simpson. Margaret's father became King, and her older sister became heir presumptive with Margaret second in line to the throne. During World War II, the two sisters stayed at Windsor Castle, despite suggestions to evacuate them to Canada. During the war years, Margaret was considered too young to perform any official duties, and instead continued her education.After the war, Margaret fell in love with Group Captain Peter Townsend. In 1952, Margaret's father died, her sister became sovereign, and Townsend divorced his first wife. Early the following year, he proposed to Margaret. Many in the government felt that he would be an unsuitable husband for the Queen's 22-year-old sister and the Church of England refused to countenance a marriage to a divorced man. Margaret eventually abandoned her plans and, in 1960, accepted the proposal of the photographer Antony Armstrong-Jones, who was created Earl of Snowdon by the Queen. The couple had two children and divorced in 1978.A hand signed cut signature by Princess Margaret with a fountain pen in black has been affixed to the front of the first day cover. The cut signature portion is approximately 1/2" X 2"..............BOTH FIRST DAY COVER AND AUTOGRAPH ARE IN VERY GOOD CONDITION. 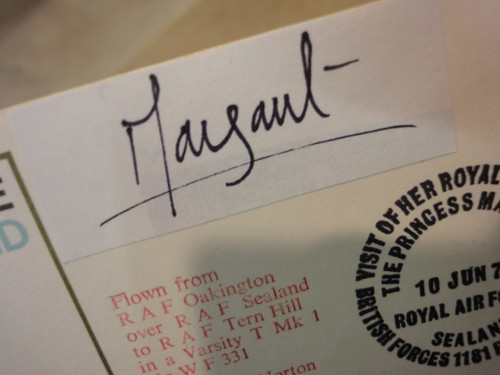