This item is a set of three-8" X 10",black and white photos of scenes from the 1985 Movie-"The Doctor And The Devils" starring Jonathan Pryce,Timothy Dalton and Twiggy.A movie version of the stage play The Doctor and the Devils, written in the 1950s by Welsh poet/playwright Dylan Thomas, had been planned and shelved by several filmmakers before producer Mel Brooks and director Freddie Francis finally brought the project to fruition in 1985. Essentially, the story is the old one about grave robbers Burke and Hare and Scottish surgeon Dr. Robert Knox (which also yielded the 1945 Val Lewton classic The Body Snatcher). Timothy Dalton plays 18th century doctor Thomas Rock, who must rely upon the disreputable Robert Fallon (Jonathan Pryce) and Timothy Broom (Stephen Rea) to provide fresh cadavers for Dr. Rock's teaching hospital. When they can't dig up corpses fast enough to suit Dr. Rock, Fallon and Broom decide to streamline their methods via murder. The photo has been autographed on one photo by Jonathan Pryce and Twiggy.Another photo has been autographed by Timothy Dalton............BOTH PHOTO AND AUTOGRAPHS ARE IN VERY GOOD CONDITION............................ 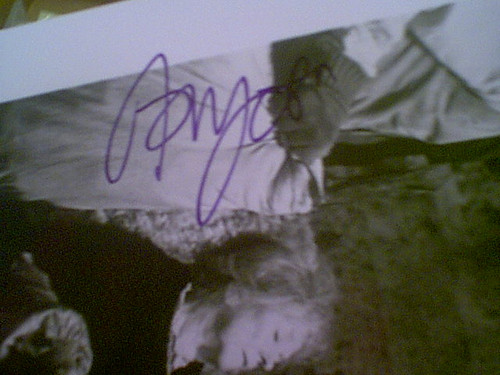