Rolling Stone Magazine/Newspaper-March 10,1977. This vintage Rolling Stone-which originally sold for eighty five cents-features a color cover photo of Princess Caroline of Monaco plus an article with photos.Princess Caroline is the eldest child of Monaco's Prince Rainier and his wife Princess Grace, and the sister to Monaco's current head of state, Prince Albert. Caroline inherited her mother's movie-star beauty and early on became a favorite with the European society press. She served as the ceremonial (if unofficial) first lady of Monaco after her mother's untimely death in 1982. Princess Caroline's first husband was French banker and playboy Philippe Junot; they were married in 1978 and divorced in 1980. She then was married to Italian industrialist Stefano Casiraghi from 1983 until his death in a power-boat racing accident in 1990. In 1999 she married Prince Ernst August of Hanover; their daughter, Alexandra, was born later that year. Her sister Stephanie (b. 1965) is also a favorite of the celebrity press.The Rolling Stone has been autographed on the front cover by Princess Caroline...........BOTH ROLLING STONE AND AUTOGRAPH ARE IN VERY GOOD CONDITION. 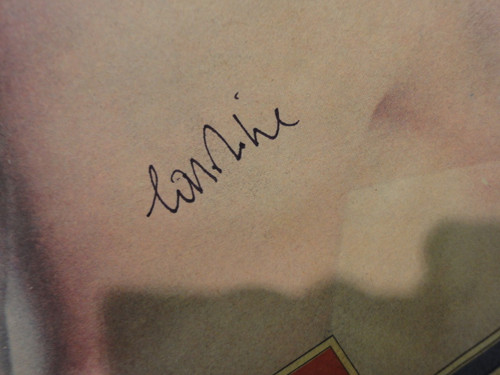