"All The Principality Of Monaco"-1986-Editorial Escudo De Oro-8" X 9 1/2"-softcover book with color photos-signed by Prince Albert of Monaco and Princess Stephaie of Monaco.Albert II, Sovereign Prince of Monaco (Albert Alexandre Louis Pierre Grimaldi; born 14 March 1958) as of 2011 is the head of the House of Grimaldi and the ruler of the Principality of Monaco. He is the son of Rainier III, Prince of Monaco, and the American actress Grace Kelly. His sisters are Caroline, The Princess of Hanover, and Princess Stéphanie of Monaco.....Princess Stéphanie of Monaco, Countess of Polignac (Stéphanie Marie Elisabeth Grimaldi; born 1 February 1965) is a member of the princely family of Monaco. She is the youngest child of Grace, Princess of Monaco and Rainier III of Monaco, and the sister of Albert II of Monaco and Princess Caroline. Stéphanie has been a singer, swimwear designer, and fashion model; her mother lovingly called the princess her "wild child." The book has been autographed on the title page by Prince Albert and Princess Stephanie................BOTH BOOK AND AUTOGRAPHS ARE IN VERY GOOD CONDITION. 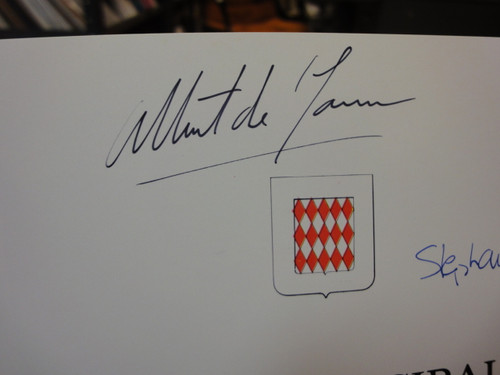