"Don't Give Up The Ship"-1935-Remick-sheet music. Thi song is featured in the 1935-Warner Brothers Movie-"Shipmates Forever". The movie stars Dick Powell and Ruby Keeler and they are featured on the front cover of the sheet music in an original scene.This musical drama stars Dick Powell as the son of an admiral (Lewis Stone), who'd rather sing than go to sea. Through the genteel pressures of Powell's girlfriend and nightclub partner Ruby Keeler, Powell dons Navy garb and becomes a hero. Busby Berkeley had nothing to do with this one; the direction was in the capable hands of sentimentalist supreme Frank Borzage. The Borzage touch was particularly noticeable in a heartrending--but non-maudlin--scene in which Ross Alexander is "washed out" as an Annapolis cadet. Shipmates Forever proved to be a treasure trove of background music for the Warner Bros. cartoon department. The sheet music has been autographed on the front by Dick Powell in faded black fountain pen and Ruby Keeler in faded blue fountain pen.......BOTH SHEET MUSIC AND AUTOGRAPHS ARE IN NICE CONDITION....... 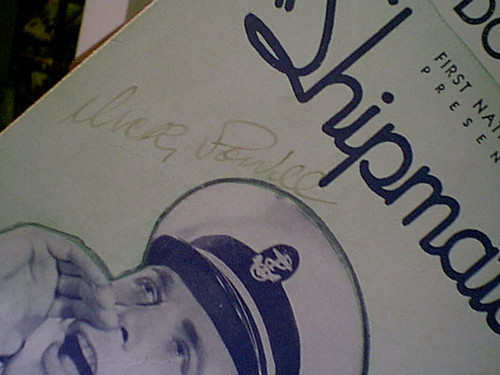