Mary Pickford-"Sunshine And Shadow"-1954-Doubleday-5 1/2" X 8 1/2"-224 pages-hardcover book-with photos-Signed By Author.Destined to become America's first sweetheart, Mary Pickford was born Gladys Marie Smith on April 8, 1892, in Toronto, Ontario, Canada. Acting would become second nature to little Mary. Her parents were actors and it was only natural that she would follow in their footsteps. Her mother wasted no time in introducing her to the stage, and she appeared in one production at the age of six. After numerous stage plays, Mary entered the film world and immortality. At the age of 16 she starred as Dorothy Nicholson in Mrs. Jones Entertains (1909). The next year was a busy one for her. In the early days of filmmaking it wasn't at all uncommon for performers to churn out several films per year, often working on more than one at a time. In 1909, Mary appeared in 51 films - almost one a week! She had joined the 'American Mutoscope & Biograph [us]' under the direction of D.W. Griffith. Griffith, from Crestwood, Kentucky, and some of his films with Mary reflected his home state such as In Old Kentucky (1909), In the Border States (1910) and A Feud in the Kentucky Hills (1912). If the 1909 season was busy for her, the following year was no less hectic, with Mary putting in work on 49 films. In 1911 she left Biograph to work with Carl Laemmle, but returned to Griffith the next year, in which she put out only 27 films, as opposed to the 48 she did in 1911. By now Mary was 20 and had appeared in 176 films; most performers today couldn't boast that kind of work record for their entire career. By 1913 Mary had cut back her grueling schedule drastically, with only four movies in 1913, but she was by no means idle; she was now writing and producing films. In 1920, she was in only two films - Suds (1920) and Pollyanna (1920) - but, more importantly, she helped to establish United Artists Pictures, a studio that was responsible for many great films for the next 60-plus years before being bought by MGM. Mary was more than an actress; she was a tough, savvy businesswoman with, and was proud of the fact that she knew what worked for her and what didn't. On top of all that, she was one of 36 founders of the Academy of Motion Picture Arts and Sciences. Finally, at 43, Mary made her last film, Star Night at the Cocoanut Grove (1934), and then retired from films for a well-deserved rest. Her career lasted from 1908 to 1935, encompassing 236 films. Without a doubt, Mary Pickford was the most popular star in the silent era, if not of all time. She was awarded an Oscar for Lifetime Achievement in 1976, from the very organization she had started years earlier. The book has been autographed on the title page by Mary Pickford with a fountain pen in green..........BOTH BOOK AND AUTOGRAPH ARE IN VERY GOOD CONDITION. COVERS HAVE WEAR......... 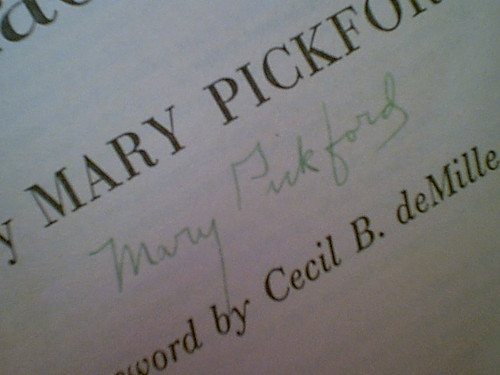