"Little Annie Rooney"-1925-M. Witmark-sheet music.This song is featured in the 1925 United Artists Movie-"Little Annie Rooney". The movie stars Mary Pickford and she is featured on the front cover in an original vintage scene.Thirty-two year old Mary Pickford returned to form as America's Sweetheart as Little Annie Rooney, a tough teenager from the streets who gets into mischief with her little gang of ruffians. She has a boyfriend, Joe Kelly (William Haines), whom she is sweet on. But when her father (Walter James) is killed, her brother Tim (Gordon Griffith) thinks that Joe is the murderer. Tim shoots Joe with his father's gun, but Annie, convinced of Joe's innocence, gives him a blood transfusion and saves his life. She then organizes her gang of street kids to search for the real killer of her father.The sheet music has been autographed on the front cover by Mary Pickford with a fountain pen in green..................BOTH SHEET MUSIC AND AUTOGRAPH ARE IN USED CONDITION................ 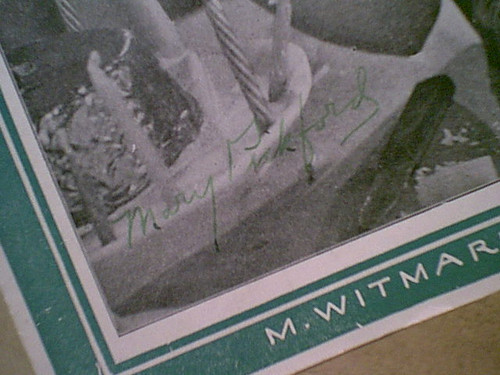