"Message Of The President Of The United States"-1856-Copies of the papers relating to the proclamation of martial law in Washington Territory-34th Congress-Ex Doc. No. 98-5 1/2" X 9"-31 pages. This booklet-published by The United States Government is a record of President Franklin Pierce's remarks on Congressional hearings involving the proclamation of martial law in Washington Territory.......Franklin Pierce (November 23, 1804  October 8, 1869) was the 14th president of the United States (18531857), a northern Democrat who believed that the abolitionist movement was a fundamental threat to the unity of the nation. He alienated anti-slavery groups by supporting and signing the KansasNebraska Act and enforcing the Fugitive Slave Act, yet these efforts failed to stem conflict between North and South. The South eventually seceded and the American Civil War began in 1861. The booklet has been autographed on the front by Franklin Pierce with a fountain pen in faded black ink.................BOTH BOOKLET AND AUTOGRAPH ARE IN VERY GOOD CONDITION. 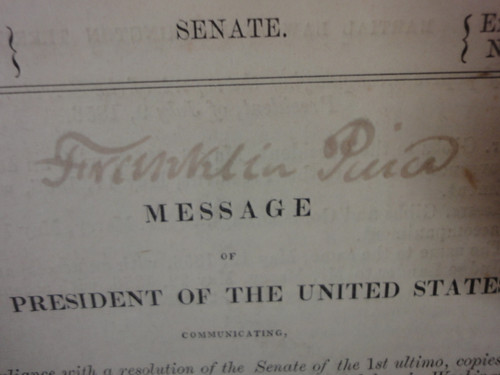