This item is an 8" X 10",black and white photo of actress Cindy Pickett.Cindy Pickett (born April 18, 1947) is an American actress.She is known for her 1970s role as Jackie Marler-Spaulding on the CBS soap Guiding Light; her role as Dr. Carol Novino on the television drama St. Elsewhere in the 1980s; for her critically acclaimed performance as the real-life Kay Stayner, the mother of a boy who was kidnapped for several years, in the dramatic TV movie I Know My First Name Is Steven; and for her cinematic roles and performances as Valerie St. John in Roger Vadim's little-known 1980 erotic cult film, Jeux de Nuit / Night Games, for which she would have the leading role, and as the tough-as-nails and heroic Dr. Jane Norris in the 1989 sci-fi-horror film DeepStar Six.The photo has been autographed on the front by Cindy Pickett............BOTH PHOTO AND AUTOGRAPH ARE IN VERY GOOD CONDITION. 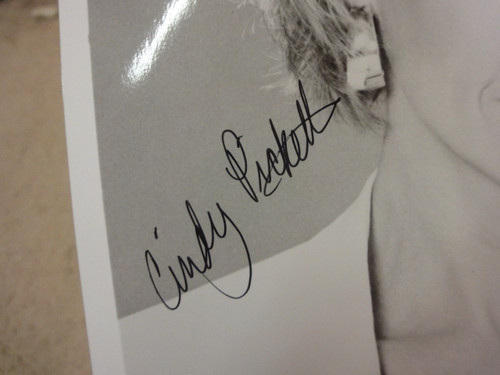