This item is an 8" X 10",color photo of actor Brad Pitt.A three-time acting Oscar nominee, Brad Pitt is also one of the leading movie heartthrobs of the 1990s and 2000s. Brad Pitt grew up in Missouri and studied journalism in college before dropping out to become an actor. Boyish and sexy, he scored as the scoundrelly hitchhiker in the 1991 movie Thelma and Louise (with Geena Davis and Susan Sarandon), a small role that nonetheless catapulted him to much bigger things. Despite having the golden glow of a leading man, Pitt quickly became known as a movie star who didn't always have to be the star. Pitt co-starred with Tom Cruise in Anne Rice's Interview With A Vampire (1994), with Bruce Willis in Twelve Monkeys (1995, earning Pitt his first Oscar nomination) and with Harrison Ford in The Devil's Own (1997). As a leading man, Pitt appeared in David Fincher's Se7en (1995, with Morgan Freeman), in Fincher's brutal urban psychodrama Fight Club (1999, with Edward Norton), and in Spy Game (2001, with Robert Redford). He's done ensemble comedy in Ocean's Eleven (2001, with George Clooney) and its sequels, and in the Coen brothers 2008 comedy Burn After Reading. And, of course, he's done big-budget star vehicles like Troy (2004, with Pitt as the weak-heeled Achilles), Mr. and Mrs. Smith (2005, opposite Angelina Jolie), the aging-backwards fantasy The Curious Case of Benjamin Button (2008, earning his second Oscar nomination), and Inglorious Basterds (the 2009 World War II film directed by Quentin Tarantino). In 2011 he was again Oscar-nominated for his role as baseball whiz Billy Beane in Moneyball, and he starred in the Oscar-nominated drama Tree of Life (directed by Terrence Malick). Pitt's other films include A River Runs Through It (1992), Seven Years in Tibet (1997), The Mexican (2001, with Julia Roberts), Babel (2006) and The Assassination of Jesse James by the Coward Robert Ford (2007, with Casey Affleck).The color photo has been autographed on the front by Brad Pitt........BOTH PHOTO AND AUTOGRAPH ARE IN VERY GOOD CONDITION. 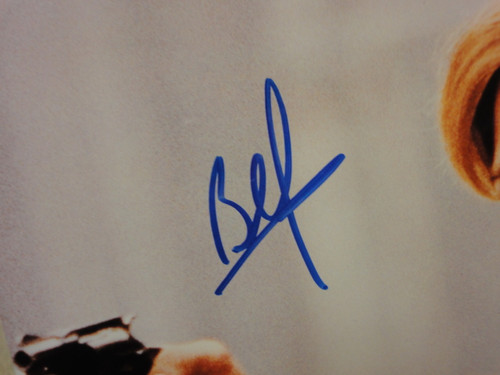