Billie and De De Pierce(Atlantic 1409)-"Jazz At Preservation Hall 2"-LP. Some tracks include-Love Songs Of The Nile,Shake It & Break It,Shine,San,Ciribiribin.De De Pierce (February 18, 1904 – November 23, 1973) was an American jazz trumpeter and cornetist. He is best remembered for the songs "Peanut Vendor" and "Dippermouth Blues", both with Billie Pierce.Pierce was born Joseph De Lacroix Pierce in New Orleans, Louisiana. Pierce's first gig was with Arnold Dupas in New Orleans in 1924. During his time playing in city nightclubs, he met Billie Pierce, who became his wife as well as a musical companion; the two were the house band at the Luthjens Dance Hall from the 1930s through the 1950s. They released several albums together but stopped performing in the middle of the 1950s due to illness, which left De De Pierce blind. By 1959 they had returned to performing, and De De Pierce toured with Ida Cox and played with the Preservation Hall Jazz Band, before further health problems ended his career.He died in November 1973, at the age of 69.....Wilhelmina Goodson, better known as Billie Pierce (June 8, 1907 – September 29, 1974) was an American jazz pianist and singer.She was born in Marianna, Florida,one of seven piano-playing sisters (including Ida Goodson), born to a mother and father who both themselves played piano. Early in the 1920s, Pierce played with Bessie Smith in a theater in Pensacola, Florida, and later in the decade played in the bands of Alphonse Picou, Emile Barnes, and George Lewis.In the 1930s she played at the Blue Jay Club, where she met trumpeter De De Pierce; the two fell in love, married, and co-led their own ensemble, which served as the house band at Luthjen's Dance Hall in the 1950s. She played in the Preservation Hall Jazz Band,and was a regular on the New Orleans jazz scene in the 1950s through the early 1970s.She died in September 1974, in New Orleans, Louisiana, at the age of 67. Her husband had died the previous November, aged 69.The LP has been autographed on the front cover by Billie & De De Pierce with a fountain pen in brown.........CONDITION OF VINYL,COVER AND AUTOGRAPHS IS VG PLUS.RECORD IS IN ORIGINAL ATLANTIC INNER SLEEVE. 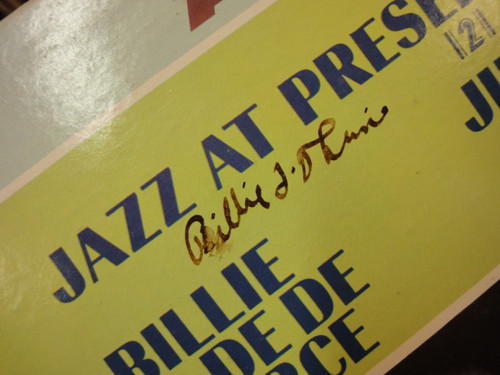