This item is an original press kit which features the 1983 Universal Movie-"Psycho II" starring Tony Perkins and Robert Loggia. This press kit was a promotional item only and was not available for retail sale. The press kit was only distributed to movie theatre owners and members of the Press. The press kit consists of a 9" X 12" folder from Universal /MCA Pictures. The folder contains 15-8" X 10",black and white photos of original scenes from the movie.A sequel to one of the most popular horror films of all time, this psychological thriller received a pleasantly surprised, positive critical reception. Anthony Perkins returns as Norman Bates, who has just been released from an insane asylum after 22 years, having been judged clinically sane by the State of California over the objections of Lila Crane Loomis (Vera Miles), sister to one of Norman's murder victims. Norman returns home to the hotel and hilltop mansion he once inhabited with his mother. As a parole condition, Norman is hired at a local diner, where he struggles to join mainstream society, despite the stares of patrons aware of his past. At the diner, Norman befriends Mary (Meg Tilly), a waitress, and it seems that he may be putting some semblance of a life back together. But then Norman begins to experience hallucinatory encounters with his long-dead mother, including a handwritten note, a phone call, and a sighting of her standing at her favorite window. Is Norman's psychosis manifesting itself again, or are old enemies attempting to drive him back into an institution? As the pressure mounts, bodies pile up, and Norman's fragile hold on normality becomes more and more tenuous. The press kit has been autographed on the front cover by Tony Perkins and Robert Loggia...........CONDITION OF PRESS KIT,PHOTOS AND AUTOGRAPHS IS VERY GOOD.......... 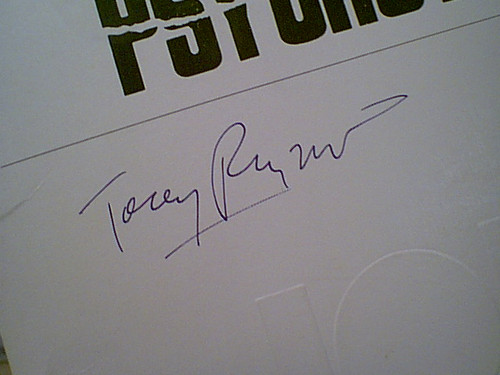