Tony Perkins(Epic LN 2294)-"Tony Perkins"-LP. This LP was released in the 1950's on the yellow and black Epic label. Tracks include-April Fool,Just Friends,Hit The Road To Dreamland,This Time The Dream's On me,How Long Has This Been Going On,But Beautiful,Why Shouldn't I,I Wish I Knew,Accidents Will Happen,Gone With The Wind,Better Luck Next Time,How About You.Anthony Perkins (April 4, 1932  September 12, 1992) was an Academy Award-nominated American stage and screen actor known for his role as Norman Bates in Alfred Hitchcock's Psycho and its three sequels, Psycho II, Psycho III and Psycho IV: The Beginning.Perkins' first movie was The Actress (1953); he received an Academy Award nomination as Best Supporting Actor for his role in his second film, Friendly Persuasion (1956). After other acclaimed performances both in film and on Broadway, he starred as Norman Bates in the 1960 film Psycho. The role affected the remainder of his career. Following the success of Psycho, Perkins had a successful career in Europe. He created a portrayal of Joseph K. in Orson Welles' The Trial (1962), a cinematic adaptation of the novel by Franz Kafka. Upon returning to America, he took the role of a disturbed young murderer in Pretty Poison (1968). He starred in the sequels and prequel to Psycho, including Psycho II, Psycho III (which he directed) and Psycho IV: The Beginning. He also played the chaplain in Catch-22 (1970). Despite these successes, most of his later work was made-for-TV movies. Perkins also co-wrote, with composer/lyricist Stephen Sondheim, the screenplay for the 1973 film The Last of Sheila, for which they received a 1974 Edgar Award from the Mystery Writers of America for Best Motion Picture Screenplay. Among his Broadway credits are the Frank Loesser musical Greenwillow (1960) and Bernard Slade's 1979 play Romantic Comedy opposite Mia Farrow. Perkins's life was meticulously documented in the 1996 biography Anthony Perkins: Split Image written by Charles Winecoff. The LP has been autographed on the front cover by Tony Perkins in black fountain pen............CONDITION OF VINYL,COVER AND AUTOGRAPH IS VG.................... 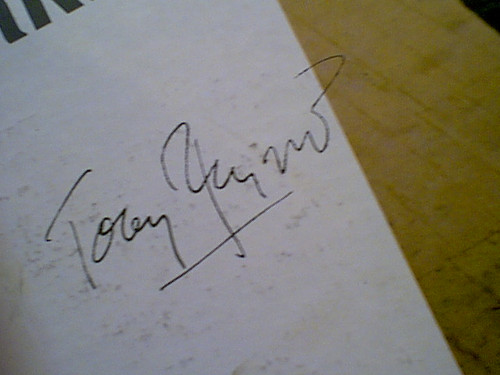