People Magazine-June 13, 1983-126 pages. This vintage People Magazine-features a color cover photo of actor Tony Perkins plus an article with photos.Psycho II is a 1983 American film and the sequel to Alfred Hitchcock's Psycho. The film stars Anthony Perkins, Vera Miles, Robert Loggia and Meg Tilly. The film was directed by Richard Franklin and written by Tom Holland. The original music score was composed by Jerry Goldsmith, replacing the late Bernard Herrmann.It is unrelated to the 1982 novel Psycho II by Robert Bloch, which he wrote as a sequel to his original novel Psycho.The film did well financially (leading to two further sequels) and moderately well critically. Several critics noted that the film worked hard to sustain the suspenseful atmosphere of the original. Inevitably, it was seen lacking the unique Hitchcock touch, with the plot weakened by the contrivance of leaving the door open for further sequels.The People Magazine has been autographed on the front by Tony Perkins.............BOTH MAGAZINE AND AUTOGRAPH ARE IN VERY GOOD CONDITION............. 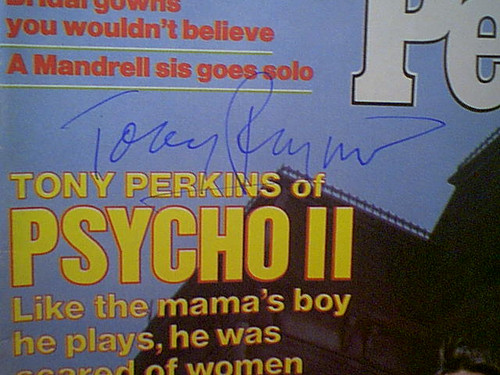