Playbill for The Alvin Theatre-"Greenwillow"-1960-Starring Tony Perkins-6" X 9"-44 pages-theatre program.Greenwillow is a musical with a book by Lesser Samuels and Frank Loesser and music and lyrics by Loesser.Based on the novel by B.J. Chute, the fantasy is set in the magical town of Greenwillow, where the eldest in each generation of Briggs men must obey the "call to wander," while the women they leave behind care for the home and rear their children in the hope that someday their husbands will return. Gideon loves his girlfriend, Dorrie, and would like nothing better than to settle down with her, and finds in the town's newest inhabitant, the Reverend Birdsong, an ally who will try to help him make his dream come true. Following a pre-Broadway run at Philadelphia's Shubert Theatre, the production, directed by George Roy Hill and choreographed by Joe Layton, opened on March 8, 1960 at the Alvin Theatre where, hampered by lukewarm reviews, it ran for only 97 performances. The cast included Anthony Perkins, Cecil Kellaway, Pert Kelton, Ellen McCown, William Chapman, and Marian Mercer.The Playbill has been autographed on the front cover by Tony Perkins with a fountain pen in blue................BOTH PLAYBILL AND AUTOGRAPH ARE IN AVERAGE CONDITION............... 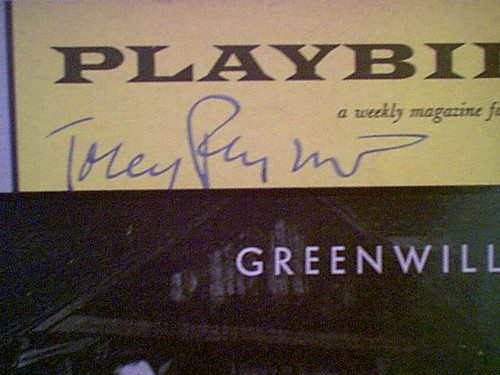