Shimon Peres-"David's Sling"-1970-Random House-5 1/2" X 8"-Hardcover Book-With Jacket-First Edition-Signed By Author.Elected Israel's ninth president in 2007, Shimon Peres was three times prime minister of Israel: briefly in 1977, from 1984-86, and again from 1995-96. Before reaching that post he was already a grand old figure of Israeli politics: he emigrated to Palestine from Poland in 1934, and was put in charge of Israel's navy after the Israeli War of Independence. He served in the Defense Ministry and was elected in 1959 to the Knesset. In 1968 Peres helped found the Labor Party, and spent the next two decades jockeying with Yitzhak Rabin over control of the party and the government. When Rabin resigned in 1977, Peres served as acting prime minister. He was part of a National Unity Government after elections in 1984, serving as prime minister until 1986, when he handed the reins to Yitzhak Shamir. As prime minister, Peres moved toward peace with Palestine and withdrew Israeli troops from Lebanon. As Minister of Foreign Affairs, Peres participated in secret peace negotiations in Norway, and as a result shared the 1994 Nobel Peace Prize with Rabin and Yasser Arafat. After Rabin's assassination in 1995, Peres again became prime minister, but lost in the 1996 elections to Benjamin Netanyahu and in 1997 declined to seek the leadership of the party. In November of 2005, Peres announced that he would quit the Labor party to join the sitting prime minister, Ariel Sharon, in a new centrist party known as Kadima. Peres has served in nearly all the top civilian posts in Israel and, after a string of election failures, was elected to the presidency in June of 2007, at the age of 83.The book has been autographed on the title page by Shimon Peres..........BOTH BOOK AND AUTOGRAPH ARE IN VERY GOOD CONDITION. 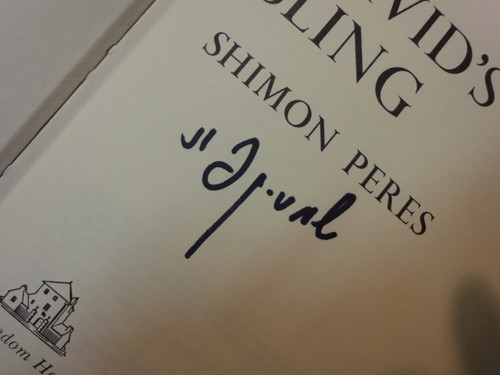