This item is a 10" X 14",color lithograph photo of Richard Perle.Richard Norman Perle (born 16 September 1941) is an American political advisor, consultant, and lobbyist who began his career in government, a senior staff member to Senator Henry Scoop Jackson on the Senate Armed Services Committee in the 1970s. Later he was heavily involved with the Reagan administration and served as the assistant Secretary of Defense and also worked on the Defense Policy Board Advisory Committee from 1987 to 2004. He was Chairman of the Board in 2001 under the Bush Administration but eventually resigned in 2003 due to conflict of interests.He is a member of several think-tanks, such as the Hudson Institute, the Washington Institute for Near East Policy (WINEP) Board of Advisors, the Center for Security Policy (CSP), and (as a resident fellow) the American Enterprise Institute for Public Policy Research, as well as the neoconservative Project for the New American Century (PNAC) and the Jewish Institute for National Security Affairs (JINSA). He is also a Patron of the Henry Jackson Society. Perle has written extensively on a number of issues; his cited research interests including defense, national security, and the Middle East. Aside from these engagements, Perle is the former co-chairman and director of Hollinger, Inc., a partner of Trireme Partners and a non-executive director of Autonomy Corporation.The lithograph photo has been autographed on the front by Richard Perle...........BOTH PHOTO AND AUTOGRAPH ARE IN VERY GOOD CONDITION. 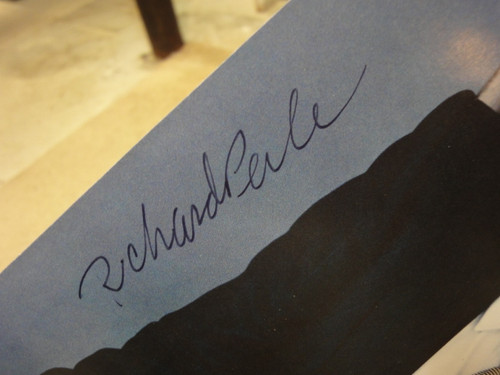